The first steamboat arrived in New Orleans on January 12, 1812. Built by Robert Fulton in Pittsburgh, it started down the Ohio River through the Mississippi River to New Orleans. The boat’s name was, in fact, “The New Orleans”. It wasn’t exactly speedy- its top speed was only 3 mph!

After making three round trips between Natchez, Louisiana and New Orleans, its broilers exploded! Mr. Fulton quickly built another steamboat also named “The New Orleans” and this one wasn’t much faster- clocking in at a speedy… 4 mph.

The original steamboats weren’t designed for passengers, but for cargo to be sold in New Orleans- because of the likely chance that the boilers might explode. However, people wanted to ride them anyway. (Yeah, we’ve always been a bit crazy in New Orleans.) Slowly steamboat builders did start to make them more suited to riders.

Steamboat fare was about 15 dollars going up-river to Natchez and 30 dollars to Baton Rouge. However, going down-river to New Orleans was cheaper- around 11 to 15 dollars. Mind you, in today’s money that’s almost $300!

In the heyday of steamboats (circa 1840) there were about 450 boats cruising the Mississippi. Some boats eventually travelled relatively long distances- taking about 4 days to reach St. Louis, Missouri.

Steamboats started to go out of fashion when trains proved to be more efficient. The only two steamboats left in New Orleans are the Steamboat Natchez- which was rebuilt in the 1970’s from another steamboat- and the Creole Queen. Both of which you can ride today!

Thank you for your review. I am happy that your enjoyed the tour with Randy.

Loved this walking tour! My mom and I had done a ghost tour at the beginning of our trip to New Orleans and unfortunately, we were very disappointed. I emailed Unique the last day of our trip to see if they could fit us in because it said it was all sold out online and it was our last opportunity to do it. They were very accommodating and allowed us to join the group, and I am so glad that they did! We really enjoyed this tour with Tracy and it was a great way to cap off our vacation. She was so enthusiastic and engaging, it didn't matter that we were getting soaked as we walked the city! I would highly recommend this tour over any of the other ghost or "spooky" tours out there. More 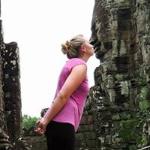 Monique was a great guide and gave us a great tour, I was already a bit of a maven with some of the other tours we took, however Monique cleared up couple details that were not shared in other tours, I suspect due to time....